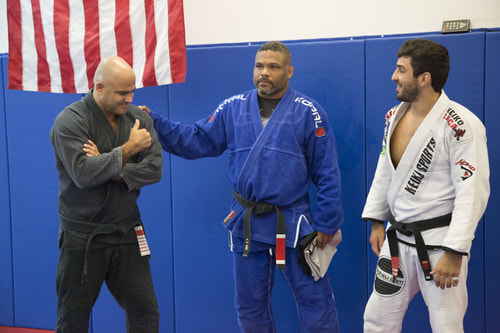 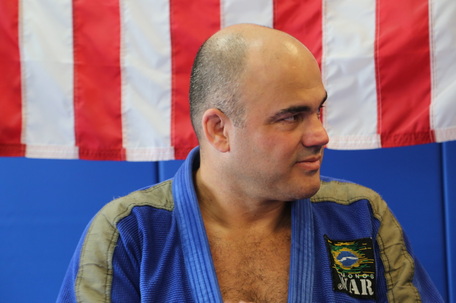 In 1987, at the age of 13, Master Dalla started training in Brazilian Jiu-Jitsu (also known as Gracie Jiu-Jitsu) in Rio de Janeiro, Brazil under Jorge Pereira. In 1993, after years of training and successful competition, and having passed through all the required belts (Yellow, Orange, Green, Blue, Purple, & Brown), Master Dalla became the very first student to receive a Black Belt from Master Pereira. Known in Brazil and throughout the world simply as “DALLA”, he is one of the most respected Brazilian Jiu-Jitsu (BJJ) fighters and instructors in the world.

Similar to some other martial arts, training lineage is very important in Brazilian Jiu-Jitsu. Master Dalla’s teacher, Jorge Pereira, received his Black Belt from the legendary Rickson Gracie. We are very fortunate to have a Black Belt of Master Dalla's pedigree and seniority teaching in Northern Virginia.

Master Dalla has dedicated his life to teaching martial arts and Brazilian Jiu-Jitsu. In 2002, at the request of his well-known Black Belt student Lloyd Irvin, Master Dalla moved from Brazil and began teaching in the greater Washington, D.C. area. He teaches personally at his schools in Ballston and Woodbridge, VA every night and also instructs on a periodic basis at schools throughout Northern Virginia that are part of the BIG BROTHERS network run by a number of Master Dalla's black belts.

With Northern Virginia as his adopted home and the home of his children, Master Dalla has committed himself to spreading the teaching, practice, and philosophy of traditional martial arts through the study of Brazilian Jiu Jitsu.
Mini-documentary about Master Leo Dalla; video by Francis Torres.
_______________
Professor Kelly Grissom,
​2nd Degree Brazilian Jiu Jitsu black belt under Master Leo Dalla
Founder, KOA Team
Kelly is a retired Marine with combat tours in both Iraq (2004) and Afghanistan﻿﻿﻿* (2005-06) who started training in Judo in Okinawa, Japan while stationed there as a young Marine in the early 1990's. He continued to train in Judo, to include competing for the now defunct, Marine Corps Base Quantico Judo Team, until the demise of the Marine Judo program. Although he no longer regularly practices Judo outside of BJJ training, Kelly holds a Nidan (2nd degree black belt) in Judo, recognized by the USJA and USJI.

In 2002, Kelly was introduced to Leo Dalla Black Belt, and his first Brazilian Jiu Jitsu instructor, Professor Chad LeBrun of the LAB Martial Arts Academy in Fredericksburg, VA and owner of the elite training company 3 Range Combatives. Under Professor LeBrun's guidance and teaching, Kelly earned his blue belt in 2003.

In 2008, Kelly returned to the Northern Virginia area and resumed his training with Master Dalla. Under Master Dalla’s guidance and coaching, Kelly earned his brown belt in April 2010, and his black belt in 2012. In 2018 Kelly was awarded his 2nd degree by Master Dalla. 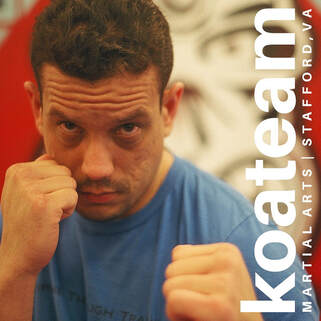 Coach Miguel has been training and studying martial arts for over twenty years and teaching for going on 20 years. His background is in Muay Thai, Okinawan Karate, Tae Kwon Do, Judo, Sambo, Japanese Jujitsu, boxing, and Filipino Martial Arts.   Miguel received his first black belt at the age of thirteen on the island of Okinawa under noted Okinawa Goju Ryu Master Masaaki Ikemiyagi. He then trained with Master Cardo Urso, where he resumed his training in Okinawa Karate. In addition to learning Okinawan Karate from Master Urso, Miguel was instructed in the arts of boxing, Judo, Japanese Jujitsu, wrestling and Sambo holding multiple black belt degrees in karate and Japanese Jujitsu under Master Urso.

Miguel began his training in Muay Thai and Filipino Martial Arts at Navy SEAL Pat Tray’s Trident Academy of Mixed Martial Arts in Woodbridge, VA (﻿www.tridentmma.com).  Miguel rapidly progressed in both arts while learning from Kru Mikey Custodio, leading to an Instructorship ranking in Muay Thai under Mr. Tray, the most senior Full Instructor in Northern VA for the Thai Boxing Association of the USA. In 2014, Coach Miguel earned his KRU rank from Khun Kru Cardo Urso who lives, teaches, and trains professional fighters in Atlantic City, New Jersey. As of December 2019, Miguel is also a certified KRU under "The Punisher" Sakasem. Coach Miguel also holds a brown belt in Jiu Jitsu under Master Dalla and Professor Kelly.

As an instructor, KRU Miguel's experience teaching has included teaching programs designed for students at all levels, from members of local and federal law enforcement, to members of the Armed Forces, as well as training many amateur MMA fighters. His Muay Thai program covers the understanding of technique, strength and conditioning, and in KRU Miguel view the most important component of all, realistic combat application of knowledge. KRU Miguel focuses on teaching proper technique while challenging and encouraging his students physically and mentally in a safe training environment. 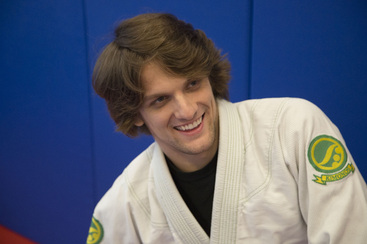 Coach Adam is a BJJ black belt under Professor Kelly and Master Dalla and has trained with KOA Team since the school opened in May 2010. He is a "plank owner" of KOA Team and he was also the Team's first 'officially' registered student. Coach Adam exemplifies the team motto of "discipline through training" by his consistent performance and hard work. In 2021 Adam assumed the role of KOA Team's Head JJ Coach. He is very dedicated to the development of KOA Team's keikis and juniors and he has spent countless hours helping the Team's younger members develop their jiu jitsu skills.

In addition to his role at KOA, Adam also serves as a regular contract-instructor with the elite 3 Range Combatives company.
​__________
KRU Carlos Ansley,
Lead Instructor
(below - center; with KRU Mikey Custodio standing to Carlos's right and KOA's KRU Miquel) 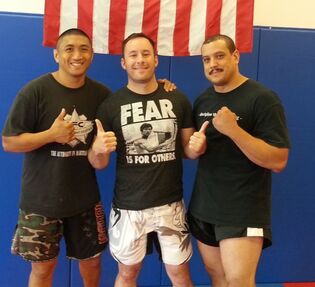 Coach Carlos has been training and studying martial arts since the age of 5 and coaching over
the past 13 years. Carlos is also a local law enforcement officer and U.S. Navy veteran. His
martial arts background is in Muay Thai, Japanese Karate, Japanese Kenjutsu, boxing, Filipino
Martial Arts, Jeet Kune Do and various systems of law enforcement defensive tactics to include
defensive firearms deployment.
Carlos first began as a Muay Thai assistant instructor under Master Michael Boyce in
Winchester, VA (www. Boycesmartialarts.com). He then trained in Muay Thai, Jeet Kune Do
and Filipino Martial Arts at Navy SEAL Pat Tray’s Trident Academy of Mixed Martial Arts in
Woodbridge, VA (www.tridentmma.com). Carlos also assisted with instruction under Kru
Michael Custodio at Trident Academy before enlisting in the U.S. Navy.
As a U.S. Navy Master-At-Arms (Military Policeman), Carlos began his education in law
enforcement while continuing his martial arts training around the world. Through his travels
during his service, Carlos was able to train at martial arts academies in countries such as
Bahrain, The United Arab Emirates and Sicily, Italy. In 2011, he left military service and began
his career in civilian law enforcement. Capitalizing on his talent and experience teaching, his
agency appointed him as a field trainer and instructor. Carlos holds multiple law enforcement
instructorships and certifications including small arms range line coach, defensive tactics
instructor, escalated threat response, the use of deadly force and the use of less lethal
weapons. He also regularly teaches local citizens concealed carry safety classes and personal
self-defense.
In 2014, Coach Carlos traveled with Coach Miguel to earn his KRU rank from Khun Kru Cardo
Urso who lives, teaches, and trains professional fighters in Atlantic City, New Jersey. Coach
Carlos also holds a blue belt in BJJ under Professor Kelly.
As an instructor, KRU Carlos has successfully coached children and adults at all levels, to
include members of local and federal law enforcement and members of the Armed Forces. He
assists Kru Miguel with the KOA Team Muay Thai program in the teaching of proper technique
while challenging and encouraging students physically and mentally in a safe training
environment.
_______________
Craig Olszta
Assistant Jiu Jitsu Instructor
(pictures from L to R, w/ his daughter; w/ Malick (KOA's first Junior student); & w/ his son at a regional tournament)
___________________
Coach Craig  is a BJJ brown belt under Professor Kelly and Master Dalla and has trained with KOA Team since early in KOA Team's history. Coach Craig is a qualified BJJ referee with several competition organizations and is a successful competitor himself to include gold at the 2016 IBJJF Charlotte Open and Silver at the 2017 IBJJF Washington, DC Open. In addition his focus on the development of our advanced juniors, Craig is also a fixture coaching and instructing with KOA's adult BJJ fundamentals program.
__________
Recommended Reading List: 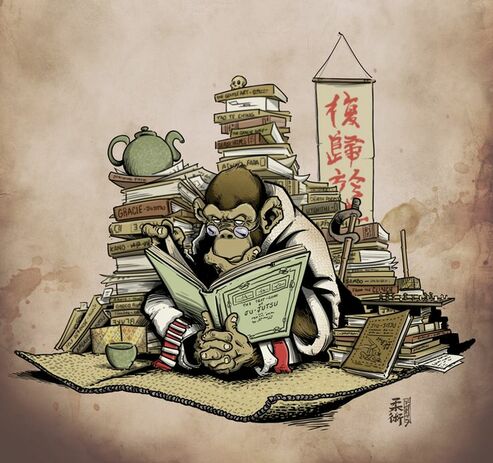 Black Belt:
- Mind Over Muscle: Writings from the Founder of Judo
by Jigoro Kano (Naoki Murata, compiler)
&
- Miyamoto Musashi: His Life and Writings
by Kenji Tokitsu
&
- Stealing Fire: [...]: Revolutionizing the Way We Live and Work
by Jamie Wheal and Steven Kotler
Hompage - Back to Navigation